One year on from winning TfL’s £500m bus-shelter contract, JCDecaux is turning London into the ‘global showcase for digital outdoor’, Spencer Berwin tells Gideon Spanier. But will advertisers be persuaded?

Gaze along London’s Oxford Street and it’s hard to miss a line of seven-foot-high billboard screens, each displaying the same ad, stretching into the distance. The effect is like a series of giant glossy magazine pages, with brands such as O2, Prada and Dior on rotation every ten or 15 seconds.

It is an important change from a few months ago. Then the billboards on Transport for London’s bus shelters were arranged in haphazard fashion – some parallel to the road, some at 90 degrees, most with no digital screens. The new, bigger 84-inch digital billboards all stand at 90 degrees to the road and are double-sided. It means they face pedestrians and drivers, making the screens easier to see than the old 72-inch posters. The billboards are internet-connected so the ads can be changed in real time too.

It is part of the biggest roll-out of digital street furniture in the world, according to JCDecaux, which won Transport for London’s estimated £500m, eight-year bus-shelter contract from Clear Channel last year. One thousand screens are being installed across the capital as part of what JCDecaux calls the London Digital Network.

Spencer Berwin, JCDecaux’s joint UK chief executive, has been eager to show off the new screens, setting up a pop-up marketing suite opposite Selfridges in June. “We want to make London the global showcase for digital out-of-home,” he says. “London is a super-city and it is also the most sophisticated city in terms of out-of-home.”

Investing in the new screens is not cheap. Industry sources suggest each billboard site costs up to £45,000. Capital expenditure for 1,000 screens is likely to be in the region of £30m.

JCDecaux has admitted the roll-out has been “taking longer than expected”. By the end of March, only 20 screens had been installed, instead of 300, and the loss of revenue was “significant”. Berwin says TfL’s requirement that JCDecaux works with approved suppliers slowed things down. More than 200 screens were in place by the start of July, in line with the company’s revised target but behind its original plan for 500 by this time.

JCDecaux needs a lift because UK revenues rose only 0.4% last year. Growth was 1.6% in 2014 and 2% in 2013 as the company found it hard to improve on 2012, when the Olympics gave a boost of 8%. Berwin won’t be drawn on the impact of Brexit, although “we’re still continuing to invest”, he says. Half of the company’s UK revenues should be digital by next year.

Politics aside, Berwin must wonder what might have been if JCDecaux, rather than Exterion Media, had won TfL’s Tube contract that is potentially worth £2bn over eight years. Victory for JCDecaux in March would have given the world’s biggest outdoor company half of the UK’s £1bn-a-year out-of-home market and two-thirds of London. “We would have loved to have won it,” Berwin admits. “We take it on the chin.”

He declines to comment further. However, a source close to JCDecaux claims it would have been more radical with the Tube than private-equity-backed Exterion. The source adds its £30m spend on the bus shelters looks more ambitious than the estimated £100m capital expenditure planned for the Tube relative to the value of each contract.

Berwin is selling what he calls the “3Ds” – digital, data and delivery. Digital lets brands create dynamic ads with the creative tailored to the time of day, location and weather. Data enables better targeting, informed by everything from shopping habits to smartphone activity, thanks to partnerships with YouGov and Telefónica. And delivery means ads can be served in real time at the click of a button from JCDecaux’s offices in Paddington. 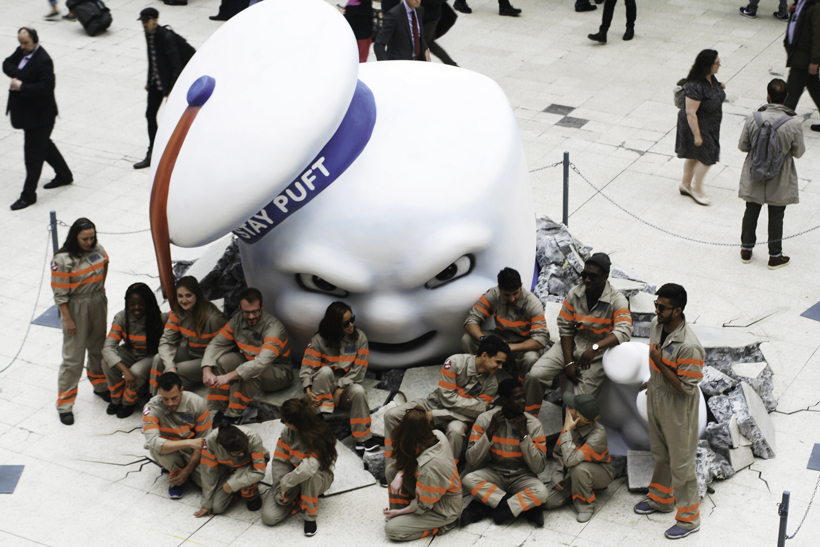 But it is taking time to convince advertisers. “We spend a lot of time talking to marketers about how they can extract the best out of our new medium,” Berwin says. “When we ask them how many pieces of copy have you got running for a particular campaign in online and the answer is a couple of hundred and we ask how many have you got for the same campaign in out-of-home and the answer is two or three, then we know we have a job to do.”

He cites how Cadbury got a sales uplift of 8% just by changing its creative to include the local area in
a Dairy Milk outdoor ad. “The statistics prove the more dynamic you are, the more effective your advertising is,” he says.

Berwin confesses it is a battle “making our voice heard” when half the ad market is in the hands of five media owners – Google, Facebook, ITV, Channel 4 and Sky – yet he is cheered by the fact that “our biggest competitors are also our biggest customers”.

He adds that despite “all the clever, smart, technical ways of reaching audiences [online], in many cases one-to-one, there is still a need for advertisers to use big media to reach lots of people, to make noise and to build brand fame”. It is why, for example, Sony Pictures has taken over the concourse of Waterloo station this week to promote the new Ghostbusters movie, he says.

Glen Wilson, UK managing director of Posterscope, says JCDecaux is talking the right language with its “significant investment in TfL’s shelters, which haven’t changed for many years”, adding: “It opens up the medium to more dynamic advertising that brands want.” Others question how transformative the bus-shelters upgrade can be and wonder if a “build and they will come” approach is enough. They also have doubts about whether JCDecaux is willing to collaborate and allow external players to “plug in” to its systems as automation becomes more important. That fits with wider criticism of the French-owned company, which suffers from the perception that it is not a team player because it refuses to be part of the UK out-of-home trade body, Outsmart.

Berwin insists that JCDecaux cares about “the medium”, not just the company. But he is also thinking beyond outdoor as JCDecaux has just become a member of another trade body, the Internet Advertising Bureau. “We have a huge ambition to move from being a business completely and only in out-of-home and establishing ourselves as a key digital media owner,” he declares.

Working alongside French fragrance brand, Nina Ricci, psLIVE created a bespoke experience to promote the Spring launch of the ‘Les Delices de Nina’ perfume.
The event toured across the country over three consecutive weekends to Birmingham, London and Manchester. Not only did consumers have the chance to make their own personalised candy (sherbet package) within our Nina Ricci Fragrance Sweet House, but they were also offered free onsite manicures on picnic-style benches and a chance to win on-the-hour prizes by playing the ‘Les Delices’ Candy Crush app, with the top scorers at the end of each hour entered to win a fairytale trip to Paris. Consumers were also given a sample of the perfume to take away with them and staff assisted with informing consumers about the perfume and testing it on the stand.
In order gain entry to the experience, consumers were asked primarily to download the Nina Ricci app, alternatively they could upload a picture of them interacting to Instagram or which created high levels of social content for the brand